DEARBORN, Mich., June 18, 2018 /PRNewswire/ — Carhartt, America’s premium workwear brand since 1889, today announced the release of 1,000 Luke Cage x Carhartt limited-edition hooded sweatshirts. The sweatshirt is similar to the one worn by the superhero on Marvel’s Luke Cage, as the bullet-proof vigilante fights crime with the weight of Harlem on his shoulders. 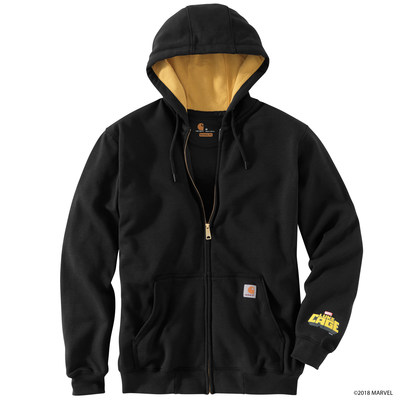 The sweatshirt takes cues from Carhartt’s K122 – Midweight Hooded Zip-Front Sweatshirt with a custom, yellow-lined hood, and a one-of-a-kind Luke Cage logo on the sleeve. The K122, which was first introduced into Carhartt’s product line in 2000, is one of the brand’s most popular sweatshirts.

“Luke Cage is on the clock 24/7. In his line of work, he can never take a day off,” said Tony Ambroza, chief brand officer at Carhartt. “When an invincible, indestructible superhero like Luke Cage decides to wear Carhartt gear instead of a suit and cape, it really personifies the rugged gear we make for those who do the toughest jobs.”

The Luke Cage x Carhartt limited-edition hooded sweatshirt is priced at $59.99 and will be available on Carhartt.com and at each of Carhartt’s 29 company stores beginning June 18.

“We feel very fortunate to have partnered with Carhartt on this project,” said Mindy Hamilton, Marvel’s Senior Vice President of Global Partnerships and Marketing. “There’s something special about holding a product like this one in your hands because it feels like it’s bridging a gap between our fans and the stories that they see unfolding on their screens.”

Luke Cage will continue to take on the city’s toughest jobs when he returns as the hero of Harlem when the second season of the hit Marvel series premieres June 22, exclusively on Netflix.

About Carhartt, Inc.
Established in 1889, Carhartt is a global premium workwear brand with a rich heritage of developing rugged products for workers on and off the job. Headquartered in Dearborn, Michigan, with more than 4,700 associates worldwide, Carhartt is family-owned and managed by the descendants of the company’s founder, Hamilton Carhartt. For more information, visit www.carhartt.com and follow @Carhartt on Twitter.

About Marvel Studios
Marvel Entertainment, LLC, a wholly-owned subsidiary of The Walt Disney Company (NYSE: DIS), is one of the world’s most prominent character-based entertainment companies, built on a proven library of more than 8,000 characters featured in a variety of media over seventy-five years. Marvel utilizes its character franchises in entertainment, licensing and publishing. Marvel Television develops and produces some of the world’s most creative and popular live-action and animated programming for broadcast and cable television networks plus digital platforms including a historic deal with NETFLIX. Its portfolio of self-produced series includes “Marvel’s Agents of S.H.I.E.L.D.” and “Marvel’s Inhumans” for ABC, “Marvel’s Runaways” for Hulu, “Marvel’s Daredevil,” “Marvel’s Luke Cage,” Emmy® and Peabody® Award-winning “Marvel’s Jessica Jones,” “Marvel’s Iron Fist,” “Marvel’s The Defenders,” and “Marvel’s The Punisher” for NETFLIX. Marvel is a co-producer on “Legion” (FX) and “The Gifted” (FOX). Marvel Television’s upcoming projects include “Marvel’s Cloak & Dagger” (Freeform). For more information, visit marvel.com. ©2018 MARVEL 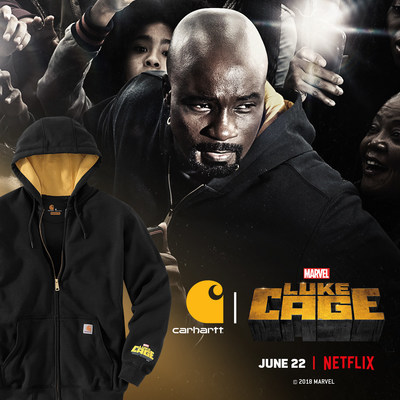 Development funding of 4.9m secured for next stage of UK waste-to-jet fuel project from industry partners and Department for Transport