KUNMING, China, June 15, 2018 /PRNewswire/ — The Coca-Cola Company and Swire Group jointly celebrated the opening of a new plant in Yunnan today. The facility, which is the largest Coca-Cola production plant south of the Yangtze River in China, is a world-class operation that received a gold certification of Leadership in Energy and Environmental Design (LEED). The investment is another example of the Coca-Cola system’s commitment to investing and growing in China. 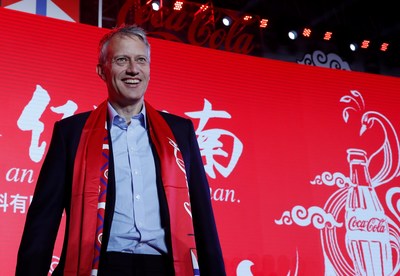 “Coca-Cola has been part of the tremendous changes in China since the opening of the market in 1979,” Quincey said. “We started our business in China with a single brand, and we’ve gone on to build a portfolio of more than 20 brands in the market today. The new Yunnan plant marks a milestone in celebrating the upcoming 40th anniversary of Coca-Cola’s return to China. Together with our bottling partners, we offer a growing portfolio to Chinese consumers, in addition to playing an important role in the communities where we operate.”

To meet the needs of the fast-growing market, Swire Coca-Cola Beverages Yunnan Limited decided to build a much larger production facility to replace the previous one. “Swire has significantly increased investment in our global Coca-Cola bottling business in recent years, and this new bottling plant is a good example of that. The increased capacity will help us satisfy millions of consumers and continue to drive sustainable growth throughout Yunnan,” said Merlin Swire.

The design and construction of the new Yunnan plant followed LEED standards:

The Yunnan location has been involved in local community development since 1995. Eleven Project Hope Schools were built, and 10,000 women have been empowered by retail and internet skill trainings in the province. Meanwhile, 144 clean water facilities were installed in 128 rural schools, providing more than 37,000 students and teachers with clean drinking water. Nine million bottles of water were sent to 24 disaster impacted areas, and 3,000 college volunteers were trained for handling emergency situations.

About The Coca-Cola Company

Coca-Cola is one of the most well-known international brands in China. We have more than 20 brands and offer over 60 beverage choices to Chinese consumers. From returning to China in 1979 until 2017, the Coca-Cola system has invested $13 billion and established a total of 45 plants in China. The Coca-Cola system today employs more than 45,000 people in China, 99% of whom are local hires. At the same time, Coca-Cola and its bottling partners have been actively participating in educational and philanthropic initiatives, supporting environmental protection and contributing to the development of local communities. Coca-Cola is also the only company that has sponsored the Special Olympics, Olympic Games, Paralympic Games, EXPO, Universiade and Youth Olympics in China. For more information, please visit www.coca-cola.com.cn or follow our corporate account “Coca-Cola China” on Weibo or WeChat.

Swire Beverages is a division of Swire Pacific Limited. The division has the exclusive right to manufacture, market and distribute products of The Coca-Cola Company in 12 provincial areas on mainland China, Hong Kong, Taiwan and 13 states in the Midwest of the United States, serving over 700 million people. On Mainland China, the company owns 18 factories scattered in Henan, Anhui, Jiangsu, Zhejiang, Fujian, Guangdong, Hubei, Jiangxi, Guangxi, Hainan, Yunnan and Shanghai. The close partnership with The Coca-Cola Company began in 1965, with the acquisition by Swire of the majority shareholding in the Hong Kong bottling company. Since then, Swire Beverages has become one of the largest bottling partners of The Coca-Cola Company.