GameStop (NYSE: GME) shares rose over 130% before crashing back down to over USD100 each by midday on Monday. The stock shortly turned negative during the disorderly trading as retail investors pushed to cover their short bets against the stock, driving shares above USD150. The stock recently traded up 26% at about USD81 per share.

The stock was momentarily halted  for volatility in morning trading after soaring 144.9% to USD159.18. By noon more than 111 million shares had interchanged hands, outperforming its 30-day average trading volumes of 29.8 million shares. 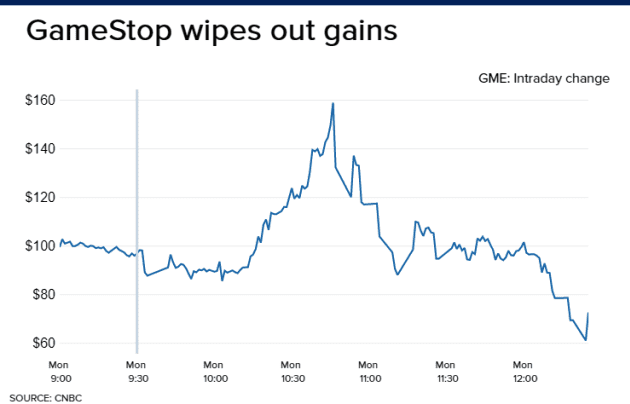 The company was up 51% at Fridays close, amid a massive short squeeze on the stock. A short squeeze compels those who bet against it to buy as a means of avoiding further losses, meanwhile causing the stock to surge.

“They’ll try to go in and short the stock, and then the stock rallies 10%, and they cover. And then what happens is it becomes a perpetual short squeeze machine,” said veteran trader Brian Shannon.

“If you look at short interest numbers, they’re rotating extremely fast right now. It’s a game of musical chairs. If you’re involved in it, if you’re looking to short it, wait for it to break down. There’s no such thing as up too much, “ said Shannon.

In January, the stock was up 250% and has risen 350% within the last three months. Just four months ago, shares were priced at USD6 each.

On Monday Telsey Advisory Group double-downgraded the stock and cut its rating to underperform from outperform. The firm says there is a disassociation between fundamentals and valuation.

“The sudden, sharp surge in GameStop’s share price and valuation likely has been fueled by a short squeeze, given the high short interest, and, to a lesser degree, speculation by retail investors on forecasts for the new gaming cycle and the involvement of activist RC Ventures,” Telsey analyst Joseph Feldman said in the note on Monday.

“We believe the current share price and valuation levels are not sustainable, and we expect the shares to return to a more normal/fair valuation driven by the fundamentals,” the firm added.