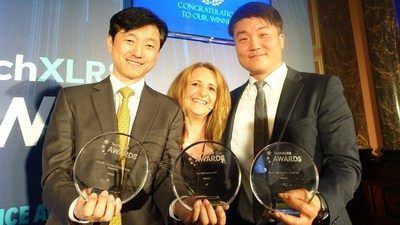 KT, South Korea’s largest telecommunications company, won the award for “Best 5G Core Network Technology” in recognition of its outstanding achievement in the development of next core network, which enables hyper-speed and ultra-low latency connectivity for various 5G immersive services such as virtual reality and autonomous driving.

“It is our great honor to win such prestigious awards for our pioneering role in 5G and other innovative technologies,” said Lee Su-Kil, head of KT’s Network Research Technology Support Unit. “We will continue our efforts to accomplish the world’s first 5G commercialization in March next year.”

For its landmark application of “Data Chain” technology specialized for electronic document management, KT was named the “Blockchain Innovator of the Year.” The company has applied the technology to its affiliate, BC Card Co., increasing the speed of handling electronic signature image files by up to 70 percent and reducing the use of server capacity by up to 80 percent. KT plans to further advance its blockchain-based service, expanding it into a Software as a Service (SaaS) solution.

TechXLR8 is the main exhibition of London Tech Week, Europe’s largest tech festival, which this year was held June 11-17 at Gibson Hall in London. The award categories are designed to highlight both research &development and solution providers leading the way in 5G, virtual and augmented reality, IoT, Cloud, connected automotive, and artificial intelligence.

*For more information, please visit our English website at https://corp.kt.com/eng/.

ABOUT KT CORP. (KRX: 030200; NYSE: KT)
KT Corporation, Korea’s largest telecommunications service provider reestablished in 1981 under the Telecommunications Business Act, is leading the era of innovations in the world’s most connected country. The company leads the 4th industrial revolution with high speed wire/wireless network and innovative ICT technology. After installing 4.5 million fixed lines for 20 million users in just 12 years, KT was the first telecom provider to introduce 5G broad-scale trial service in 2018. It is another step in KT’s continuous efforts to deliver essential products and services as it seeks to be the No.1 ICT Company and People’s Company.